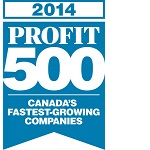 Revealed! The complete ranking of Canada’s Fastest-Growing Companies, from 1 through 500.
Read at PROFITguide.com >

Who are Canada’s entrepreneurial elite? For the 26th year, PROFIT has provided the answer with this, our annual ranking of Canada’s Fastest-Growing Companies. The 2014 PROFIT 500 operate in a dizzying array of sectors and in locations from coast to coast to coast, but they are united in one thing: their remarkable, commendable growth during difficult economic times.